It seems to be the flavour of the month to find the best parasite cleanse. Parasites are coming in for a lot of bad press, as the reason for multiple problems in humans and animals alike. However, all is not as it seems. So if a company, or a practitioner, advocates a parasitic cleanse, then they have little understanding of the true nature of health and ill health. 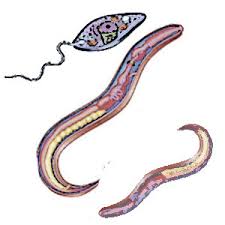 So what’s this new boy on the block all about?

Let’s first define parasites. They are organisms that live in or on another organism, its host. There are huge numbers of them in existence and live either on the surface, the skin, or internally, such as the gut or tissues. In modern language the name has a derogatory meaning.

On the surface, it certainly seems that parasites are unpleasant and unwanted and should be expelled in the fastest way. But, as in all of Nature, there is a purpose and reason for everything.

Parasites exist in every living being to some extent. Humans are no exception. No-one’s digestive tract could exist without them. So in small numbers, they are beneficial. However, when they proliferate it is showing there is a problem. If you like, they are messengers.

So why do they proliferate?

Everyone has an immune system. When it is working well, it keeps you in balance, rebuffing invading the constant barrage of pathogens and keeping the parasites at optimum numbers for your greatest good.

However, when your immunity is in poor shape, everything can, and does, go wrong. You get any and every passing pathogen. And your parasite numbers explode – as they are opportunists. Your skin will become attractive to those who like to live on it. Your internal parasites increase in numbers to the point they become obvious.

Since this parasitic explosion occurs at the same time as your health deteriorates, they can seem to be THE problem. But they aren’t. They are the EFFECT of the problem, not the cause. The problem is deeper.

This means a parasite cleanse is not the solution. And often, because of their harsh nature, they can make things a lot worse.

Something happened BEFORE, that had a deep effect on your being, knocking you off balance. Often this was a sudden happening, perhaps emotional, such as a deep grief, shock or fright. Perhaps it was physical as in a serious accident, which would also have an emotional component. Perhaps it was the effect of a drug or vaccine.

Or it could have been happening slowly over time. Things that contribute to a slow effect include non-nutritional diets or lack of food, poor living conditions, unhealthy relationships and/or work, continuous medication (including water fluoridation), etc. It’s hard to put a finger on when it started, as the effects are slow, but things get to a point when it can be hard to function normally.

Don’t get caught into thinking the effects of disease are the cause, that is so common today. This attitude is shooting the messenger. Go deeper. What happened BEFORE, is the cause.

I suggest that the best parasite cleanse, the best health immunisation, the best resolver of health issues (be they physical, emotional or mental) is homeopathy. Homeopathy and a healthy diet can resolve almost every health issue. It can certainly cleanse parasites from your system. Medical, herbal or nutritional anti-parasitics are not necessary and can be harmful.

This applies across the board – to humans and animals alike. Look for the cause, rather than shooting the messenger.