Signs and symptoms of PTSD are very individual. As the name suggests, it is the individual’s way of reacting to a traumatic event, usually in the past rather than ongoing. The body is always trying to keep itself in balance and it does this by producing appropriate coping mechanisms. 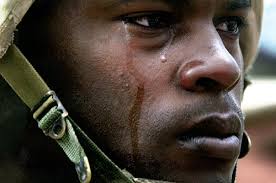 These coping mechanisms can be very useful at the time of the trauma, such as giving you the ability to fight or flee you may not otherwise possess. However, if they remain long after the event, they no longer serve you. To eliminate the coping mechanism, you have to eliminate, or balance, the original trauma. Not all traumas become stuck as they commonly show with signs of PTSD. We can usually deal with the less dramatic ones ourselves, in time.

Having said PTSD symptoms are very individual, there are some common symptoms, which have lead to this medical label. They include:

Abuse is a very subjective word. Violent acts from one person to another is probably universally accepted as abuse. However, emotional abuse is much less easy to see. It happens most often in children, without the abuser even being aware of what they are doing.

I consider that the tendency to ridicule children’s ‘invisible’ friends as a example of abuse. As is the ridiculous attitude that girls should not be angry and boys should not cry. Children should be allowed to explore who they are unheeded. Gently guided in case they hurt themselves or others, but otherwise encouraged, whether or not we understand their behaviour or not.

I draw on the understanding of animals in the rearing of their young to explain my point. Mares, as I am sure every other animal mother, are totally tolerant of their foals up to the age of 6 months of age. They will allow the foal to do anything, including biting and kicking her, as this is the time that the baby is discovering who they are. At the age of 6 months, the mare suddenly changes her stance. Now she disciples her baby to ingrain the rules of the herd.

Too often children are not allowed to discover who they are before the discipline of the human herd is imposed on them. This sets them up as targets for all manner of problems, as they don’t have the strength of who they are to draw upon.

This is why the signs and symptoms of PTSD is so individual. So should PTSD treatment be ‘one size fits all?’ Does the medical treatment for PTSD help to undo the harm or does it simply mask over the symptoms? Is there another way, another more holistic treatment of PTSD that can help strengthen the person as well as bring the past trauma into natural balance?

Of course there are! However, the pharmaceutical companies are desperate for you not to discover them. Call me cynical if you like, but they make much more hard cash by keeping you on their medications all your life. Which essentially keeps you in the dark, trapped.

Homeopathy offers you one of the most valuable and powerful ways out of the trap. Homeopathic treatment doesn’t work by masking over your symptoms. It works only by treating the underlining problem and restoring balance. This not only allows the traumatic event to fade, it also strengthens you so you are no longer an easy target for such events.

That’s not to say violent or traumatic acts won’t affect you. But they won’t set up the deeply ingrained signs and symptoms of PTSD.

You won’t need to remain on homeopathic treatment all your life. Your treatment is aimed at permanently restoring balance, without the need for constant prescriptions. This is true healing. How long this takes depends on a multitude of conditions and will vary with everyone.

Homeopathy offers you the most powerful way to restore balance, to rise above both emotional and physical ailments.

I offer you a complimentary 15 minute
consultation for you to see if I can help you.