That’s a strange thing to say – that mass hysteria is common, even encouraged. But the fact remains that it is. And it affects us all to a lesser or greater degree. 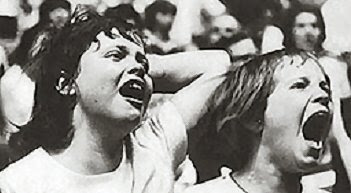 I was recently reading about a homeopath in India, who was treating many patients at his college hospital where he was studying. The clinic was a free one, so many patients had gathered. They were asked to form an orderly queue.

The students began their examinations when the professor in charge appeared. He chastised the students, insisting that each patient was seen in isolation. In the west, this is considered essential for privacy purposes. But the professor was less interested in privacy than in the effect on the remaining patients listening in to those who were first treated.

The whispers game is another way to explain the common phenomena that when we hear a complaint one person has, we also feel we may have the same problem, and often it’s exaggerated. It’s as if everyone comes out in sympathy for the first person. Some people even vie with others that their condition is/was much worse.

Another way to explain this phenomena is that people are frightened and they so fear disease, they convince themselves that they may also have the problem. At least, they want outside confirmation that they haven’t got it.

Mass hysteria is whipped up successfully by the media. The media can keep the pressure up, especially when a death occurs. This is how epidemics, or rather pandemics, occur in far flung corners of the world, seemingly too far for a pathogen to travel in the time.

International flight is often accused as the culprit in these circumstances. However, it’s far more likely that mass hysteria took over from sensationalising media reporting.

This phenomena occurs frequently at social gatherings. So the food is often blamed as the cause, often without justification.

This is a perfect example of being able to see that real pathology can result from the mind. In fact, it all must. Your mind is all powerful.

Consider this man who had an X ray which showed up a dark spot. This was explained to him as being cancerous. Within three weeks he was dead. On going through his papers, an old X ray was discovered that showed the exact same dark spot. The same size, the same location. No change. This X ray was 20 years old.

What the man didn’t know about didn’t worry him.

The west is often very dismissive and patronising about witch doctors in ‘primitive’ cultures pointing the finger. I suggest that all people are vulnerable to having the ‘finger’ pointed at them regardless of their culture.

It’s good to be aware of what is happening in the world, but take the media reporting with a very large dose of common sense. And if the ‘finger’ is pointed at you, then accept that this is merely a snapshot in your life. The diagnosis may be wrong. The discipline may be limited in its view and in its ability. The practitioner may be having a bad day.

There are many reasons why you should never accept someone else’s view point. No-one has control over you unless you give your power away.