Being your authentic self is not common today. Instead, the pressure is on to conform, to do as others do, not to stand out, not to think. And this means not to be responsible. How can you be, when you are following others, rather than your own heart? 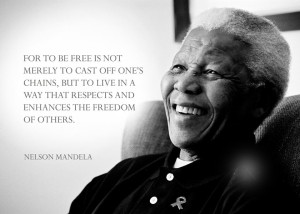 But I believe that the only way you can be happy is by being your authentic self.

When we simply follow the herd and deny our own values, we commit suicide at a spiritual level. We sever those essential links to our inner purpose, to the reason we are here at this moment, in this body. Happiness can never result from this. Instead a restlessness can come up, in an attempt to re-balance you.

Unfortunately this is often interpreted as a desire for more physical things, to buy, to spend, to create the image (of someone else), to be more ‘normal’.

Certainly, standing up for what you believe in can create conflict from those this challenges; mostly your nearest and dearest. But this downside is temporary and will fade in time, as you become more joyful and more empowered.

And if it doesn’t fade, then you have to ask yourself if those people really have your best interests at heart. Or do they see that by trampling you down, they benefit in some way?

Sometimes you don’t even know what your beliefs are, you just have an uneasy feeling when you follow the herd, when you simply go along with what someone else wants you to do. I have been there are done that and now I feel shame. I am embarassed at myself for not following what I knew to be true, by giving in to the pressure of others.

This pressure doesn’t just come from family and friends. It also comes from governments and from corporate bodies, too.

Being your authentic self means also being responsible for your actions. You won’t do anything that hurts others, or the planet.

I struggled with this area of my life, probably most my life. I knew I wasn’t the same as the herd, but I was disturbed by being different. I struggled to make an unworkable relationship work, for far too long. I knew there was a better life ‘out there’, but didn’t know what it was or where it was to be found.

It was only with successful homeopathic treatment that I started to get the courage to stand up for myself. Not to be in anyone’s face about it, but not allowing myself to be pushed around, either. Accepting what was outside of my control peacefully, but striving for what I know is right, what is responsible (not just for me).

I believe that being your authentic self is the way forward to a peaceful world, where you are fully respected for being who you are, rather than being a clone of someone famous. A world where individuals as well as organisations don’t threaten the livlihood of ordinary people, non-human species or the place we call home, the Earth.

You can be your authentic self, quietly, but with great purpose and strength, whoever you are, whatever your life currently is. Let me help you on your path.