If truth is to be told, it must be acknowledged that, despite the great advances in medical science, the battle against cancer has truly been lost.

According to Dr William Donald Kelly, D.D.S., M.S, in his book entitled One Answer to Cancer, he observes that; 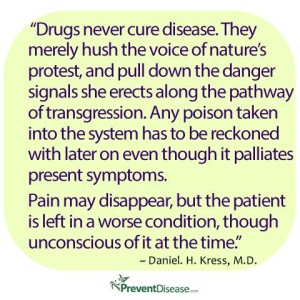 “In 1904, only one American in 24 had cancer in his lifetime. In the 35 years since I cured myself of terminal pancreatic cancer and guided some 33,000 cancer victims to health, the CANCER RATE has increased from one in five, to now, as you read this, the CANCER RATE is one in two. And the Cancer Industry calls this Progress Against Cancer”

In the Feb 09, 1994 issue of the Journal of the American Medical Association, the “war on cancer” was declared a failure;

“In all age groups, cancer incidence is increasing…Few effective treatments have been devised for the most common cancers”

What actually makes the picture worse is the fact that a high percentage of those patients who are “successfully” treated of their cancer through chemotherapy, radiation and surgery eventually die of cancer.

A recent report in Cancer and Diet, published by the East West Foundation pointed out that;

“In a British study of women under the age of 30 who had microscopic foci of breast cancer removed, it was found that 25 years later, 80 percent had died of their original disease, despite the fact that their original tumors had been tiny and had been completely removed”

It appears that a cancer diagnosis almost certainly amounts to a death sentence whether one has undergone medical treatment or not. This is a fact that medical science cannot deny especially in view of the fact that they measure the success of their interventions on “5 year survival rates” as opposed to a true cure rate.

The million dollar question is, why are the cancer treatment interventions from conventional medicine so ineffective that such a high percentage of patients have to die even after seemingly successful treatments.

The simple reason is that, conventional medicine is so obsessed with killing cancer tumors that it totally misses the bigger picture.

This strange and futile approach to the treatment of cancer was highlighted by Dr Binzel, M.D, in his book Alive and Well where he states that;

“When a patient is found to have a tumor, the only thing the doctor discusses with that patient is what he intends to do about the tumor. If a patient with a tumor is receiving radiation or chemotherapy, the only question that is asked is, “How is the tumor doing?” No one ever asks how the patient is doing. In my medical training, I remember well seeing patients who were getting radiation and/or chemotherapy. The tumor would get smaller and smaller, but the patient would be getting sicker and sicker. At autopsy we would hear, “Isn’t that marvelous! The tumor is gone!” Yes, it was, but so was the patient. How many millions of times are we going to have to repeat these scenarios before we realize that we are treating the wrong thing?

There are a few key points in Dr Binzel’s statement that explain why most people die of cancer even when under medical care.

Remember, the immune system will already be weak, otherwise cancer would not have developed in the first place.

The inevitable outcome of this scenario is that, if the patient does not die of cancer, she is most likely to die of other opportunistic diseases that capitalize on a weakened immune system.

The second key reason for the patient getting “sicker and sicker” is because, interventions such as chemotherapy are known to kill far more healthy cells than it does the cancer cells. That is principally why it is given in low doses over a long period of time to avoid killing too many healthy cells and in the process, killing the patient.

Another key point in Dr Binzel’s analysis is that, there is nothing in chemotherapy, radiation and surgery that can stop the spread of cancer since the focus is predominantly on eliminating tumors. If a patient has a fast growing cancer, there is nothing much that medical science can do for them. That patient is gone!

So, if current medical approaches are “treating the wrong thing” as Dr Binzel puts it, what then should an effective cancer treatment be focusing on?

It must focus on the treatment of the body as a whole rather than spending effort on the tumors. Dr Gerson, in his book A Cancer Therapy, advocated a cancer treatment that, “restores all biological systems”

Such an approach treats a body with cancer as opposed to treating cancer. It seeks to restore the optimum operation of all biological systems thereby eliminating the root cause of not only cancer, but even other degenerative disease that could easily have taken advantage of a body that is out of balance.

However, since alternative treatments for cancer are often referred to as “quackery” by those who think they know better, we are not only going to have 80% of cancer patients dying even after successful treatments, these figures are most likely to increase as cancer continues on its relentless march.

Khumbulani Phiri, the author of this article, is an undying advocate of alternative medicine.

Homeopathy helps to rebalance the body, an essential factor to overcome any disease.