The world seems to be at war with itself. The idea of fighting cancer, or any other degenerative disease, seems to be applauded by the onlookers and the sufferer equally. Charities are built up in the name of fighting the problem or finding the cure. 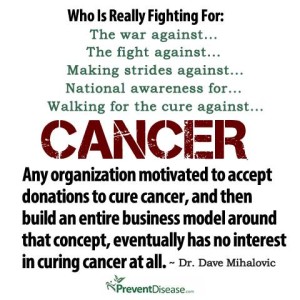 However, none of this is in the greater good, especially that of the sufferer.

First lets examine the idea of fighting. Fighting anything enhances it. This is how things happen. It’s a natural law, over which you have no control. Holding an idea in your head tends to bring it into reality. So, it’s best to hold positive ideas in your head, such as being healthy and vital.

Fighting means that you are not living in the present moment, but rather in the future. However, there is no future as when it comes, it is the present. As Eckhart Tolle explains, now is all we have. We can change the now, but not the future. Or, we can only change the future by taking action now.

So instead of fighting cancer, those who have it stand a far better chance of survival if they first accept it, then take proactive steps.

I am reminded of a serious conflict between wildlife conservationists and local farmers in an African country. The leopards were being killed by local farmers as they were killing their livestock. Their outcome looked bleak.

However, the conservationists were lateral thinkers and brought both the farmers and the heads of the local tourist industry together to discuss the matter. You might think this was a recipe for disaster, but it wasn’t. Both sides had their agenda, but both sides were able to appreciate the others points of view – perhaps they had a good mediator!

When you bring a group of people together, very often amazing ideas are born. And so it was with this conflict. I can’t recall the exact resolution, but what I do remember was that the leopard killings stopped and the farmers livestock were safe.

Perhaps the farmers received a percentage of the tourism trade. Perhaps more was spent on good fences. I don’t recall. But the outcome was good for both parties. No fighting was needed.

When you fight something or someone, you don’t consider their point of view. Or in the case of cancer, the cause. This is never on the horizon. But surely the cause should be the first thing to consider? Medically speaking, causes are not considered because then the solution may be too easy and huge profits are lost.

However, suppose the common causes of cancers were as simple as an unsuitable diet, the suppression of the immune system by medical drugs or being in the wrong job/relationship. The solution would be so easy.

With no hint of a fight.

Charities which are set up to fight for their cause will never find the solution, as they are not considering the whole, the other side’s opinion or the cause. Perhaps they don’t want to, as charities do receive a lot of funding and that creates jobs. If they discovered the cure, they would all be out of a job.

So perhaps the idea of fighting cancer was born to create a lucrative industry. Certainly it is not helping those who face this frightening condition.

So instead of fighting cancer or anything else, pause and consider why it is there. Maybe it is a wake-up call. Consider possible causes. What about the other side’s point of view? Does cancer in fact have a role to play that is helpful? Is it really as terrible as the world is lead to believe? Is it the cancer treatment killing off people, rather than cancer itself?

Don’t be frightened into taking action that everyone else does or your family and friends want you to do, or your doctor tries to push you into. Take time out and consider what you personally want to do, what is important to you. Being frightened puts you in a very weak position and when you are confronted by something serious, you need to be strong.

You are unique. Follow your heart. Tell others they need to respect your personal choices.

Homeopathic treatment doesn’t fight any condition. Instead it raises your immune health, supporting your body trying its utmost to keep you alive.

Find out if I can help you.

1 Response to "Fighting Cancer Does Not Support Health"