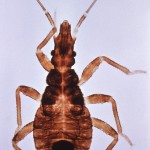 Chagas disease, also known as kissing bug disease, is a tropical parasitic disease. Although the cause is said to be the flagellate protozoan “Trypanosoma cruzi”, a blood sucking insect, in reality the cause is your immune system. It is only those with an ineffective immune system who can ever fall sick, or seriously so.

However, the disease can also be spread by contaminated blood transfusions, and congenital transmission, such as from mother to unborn baby.

Currently this disease is limited to Latin American areas, but it is not dissimilar to other diseases that are as a result of an insect bite, such as sleeping sickness in parts of Africa or a poisonous spider bite in Australia, even those diseases associated with mosquito bites.

In the early stages of Chagas disease, the symptoms are often mild with swelling at the site of the bite. As the disease progresses in those with a low immune system, which often takes years, more serious problems arise. Heart and intestinal problems are common and can be fatal.

Medical treatment is highly toxic and often ineffective, especially in the later stages.

The homeopathic treatment of any condition is timeless. In the early stages, a good home prescriber will be able to cure the problem completely, whatever the insect, leaving no trace of the effect.

In so doing, the immune system of the individual will be improved. This means  that the next time will be more mild, indeed if you are of any interest to the passing insect. Someone else with a poor immune system may be more appealing.

If medical treatment is used to treat the disease, or if it advances, the homeopathic treatment becomes more complicated and professional help is required in selecting the most appropriate remedy/ies and dosage frequency.

While the idea of Chaga’s disease may strike fear into the heart of those people who live in affected areas, it only does so because the mainstream treatment of this condition is so ineffective. For those who use homeopathy, there need be little to fear, as the treatment can be so effective and so complete in its action.

Chagas disease is not limited to people. Animals, mainly mammals, can get it too. The homeopathic treatment is little different for them, except for the fact that only objective symptoms are used to select the appropriate remedy, along with the knowledge that they have been bitten.